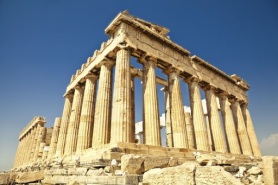 I’ve been to Greece often enough that I’ve picked up a bit of (modern) Greek. Like anyone in  my situation, I’ve had fun spotting Greek words with Englishs cognates based on Greek roots, popping up with unusual meanings in unusual contexts. Here’s my story of a typical day in a Greek visit, using some of these words. (I also translate some Greek idioms, like “the Bill Wadge”). Based on a true story.

One Day in the Greece

of the Bill Wadge

I woke up in my alien-bin after a good night’s hypno. On my way down to breakfast I noticed the sign in the elevator: maximum capacity six atoms. Greek elevators are really small.

I loaded my plaque with bacon and eggs. I think having a good breakfast is very semantic.

As an episkeptic [visitor] from Canada I appreciated the mild weather. Yesterday was a bit cryo, but today the weather was zesty – no need for a coat. They say tomorrow will be really thermos.

My collaborator Good-Looking [Aristophanes] picked me up in his autokinetic at nine the hour. We dropped some clothes at the clean-ateria and went by the ethnic bench [national bank] to get some cash. Then we went straight to the all-knowledge [university] where he slaves. He had to didact a course so I worked on my article. I don’t slave as hard as he does and I evened warned him he writes so many articles he’ll get arthritis [arthros=article]. Ha ha.

Ari/nes said he’d be a few leptos late because he had to pass by the workateria [lab]. Then we threw an eye at some ideas for liturgical systems and programming glosses [languages]. Time for lunch? Let’s fuge [leave]. Just a couple of deuteroleptos I  said, finishing my article.

What would  you like, asked the servitor. I’d had bacon for breakfast so I didn’t fancy more creatures [kreata=meat]. A nice country salad would be fine. For dessert we split a bougatsa as big as my pode. It was good but poly glucose.

After we phaged [ate] my friend had to didact again – C++. I’m glad I don’t have to math [learn]  that gloss. Meanwhile I went to freshen up in the anthropological washroom. I noticed  one of the stalls in the gynaecological washroom was out of liturgy – glad I’m an andron. Someone put up a sign saying the aitia [cause] was apolitical [uncivilized] people throwing paper in the toilet. The sign said they should gyre to the spielia [caves].

My friend is a family man and had to head off – he has a nymph [wife],  two paedia [kids] and a moron [baby] at home. He dropped me off at the alien-bin and I decided to see a movie.

What kind of movie? Astro Polemics: the Dynamo Ex-hypnos [Star Wars: the Force Awakens] was playing but as I phobed it was sold out. Anathema! [Darn!] Luckily there were other epilogs [choices]. Normally I like epistemic fantasy but espionage movies are fun too. Will the catascope [spy] be caught? Or police thrillers. See the epitheorist [inspector] chase the criminal. Not to mention war movies. Follow the career of the young axiomatic [officer] who becomes a strategist on a white hippo. Or biography – the would-be pop star with the powerful pneumons who finally has a hit tragedy [song] and nike’s a grammy.

In the end I decided I’d rather see a Gouestern, so I agora’d a ticket to the Hateful Okto. A lot of haema spilled! And necro’s everywhere! Freaky!

Later my friend and his family joined me for dinner. It was good and the logarithm was reasonable – we didn’t spend a lot of cabbage.

As we pulled out of the restaurant’s idiotic [private] parking lot I realized that soon I would have to take the  ironroad to the aerodrome. And hear the traditional Greek farewell greeting – “call a taxi” [kalo taxidi].