The Secret of Academic Success – or fun filled failure if you prefer [14,300 views]

In my research career I’ve discovered many things, including the secret of academic success (too late to help my own career). I’m  going to share the secret  with  you.

The obvious way to succeed is to do something impressive, like prove a theorem or invent some new technology. This might be helpful, but could get you into trouble if you’re not careful.

Here’s the problem: say you’re a young researcher starting out. You’ve made some progress attacking problem P. Researchers A, B, C, … have also worked on P but you think your work  puts theirs to shame (which it may or may not do in reality).

The temptation is to write papers proclaiming the superiority of your work and the pathetic inadequacy of the contributions of A, B, C, …

Well, doing so is a huge Career Limiting Move (CLM). I know because I did exactly that, in the notorious ‘Cowboys’ section of the 1985 Lucid Book I wrote with the late Ed Ashcroft (he had nothing to do with the notorious section).

Anyway, what should you do instead? The exact opposite. Write a paper which says, “P is an important problem and many talented researchers have made significant progress. A has done X, and it is good; B has done Y and it is also good;  C has done Z and it too is good; …”

“And finally, if I may, I would like to mention my own humble contribution H …”

Fortunately I discovered it in time to pass it on to some of my PhD students for whom  it  worked like a charm.

So much for success. Success is actually a bit boring. Failure, if you do it right, is a lot more fun. I had a lot of fun writing the Cowboys section and lots of people had fun reading it. I think it was worth it – and I managed to have a career in spite of it.

The Cowboys section wasn’t even my first CLM. That happened when I was a beginning professor in computer science a long time a go in a University Far Far Away (the UFFA).

I have a theory about new academic jobs. When they hire you, they’re convinced at first that they’ve made a great choice. This honeymoon period  lasts about six months at which point their attitude flips and they become convinced that they hired a bozo. At about this point, when they started becoming suspicious of me, they asked me to give a department seminar. Sure, I said, and started working on something special. 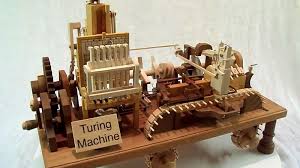 was inspired by a brief paragraph or so in Hartley Roger’s famous book about recursive function theory. It was basically speculation about the power of Turing machines that could execute an infinite number of steps in a finite amount of time. It quotes John Addison (my PhD advisor) as calling this “the ℵ0 mind”.

“The ℵ0 mind” – what a great title! So I started working on a talk based on this idea. I had to flesh out Roger’s speculation and that involved, among other things the countable ordinals. Non trivial to present because in general computer scientists know nothing about ordinals.

I wish I could remember the details, but at any rate I worked out a 40 minute presentation. Then it occurred to me that you didn’t need a lot of background to appreciate it because I explained e.g. ordinals from scratch. I was teaching the theory course at the time (Turing machines, grammars, etc) and told my class about the seminar. I must have sparked their curiosity.

Comes the day of the seminar most of the faculty shows up, keen to see what the new hire has to say. And then about half of the theory class files in, keen to find out more about super Turing machines. Undergraduates at a research seminar … unheard of.

Well the presentation went pretty well and after, one of my math buddies told me he was very impressed that it had something for all levels – for undergraduates as well as faculty. I remember Addison talking about “Shakespearean” talks that appealed both to the educated in the balconies and the crowd standing below. When I left I felt pretty good about it all.

Of course it was a disaster.

Neither the UFFA computer science department chair nor his colleagues said anything to me about it – ever. That was the first sign that something was wrong, though at the time I was too naive to notice.

I did get one comment. After the seminar I was chatting with a colleague/friend and a visitor from Bell labs who was a real wise ass. I told them that I was really happy with how the seminar went and looked forward to giving another. “Yeah” says the wise ass, “you can read another book”.

This of course was a mortal insult, though I didn’t realize it at the time. I just thought it was an  odd thing to say. Did he believe that I simply presented Roger’s work?

In fact they never asked me to give another seminar in all the year and a half I remained at UFFA.

It took me a long while to figure out what (to my best guess) happened. Certain colleagues were offended that I’d encouraged a bunch of undergraduates to show up at a research seminar. They probably figured that if undergraduates could understand even part of it, it can’t be research. All this stuff about “ordinals” didn’t help. And crediting (correctly) a book probably convinced them that my nonsense wasn’t even original.

Could I have handled it all better? Yes, I could have cleared it with the chair to invite the undergraduates. I could have explained that I was riffing off a short paragraph in Roger’s book. Perhaps I could have justified ordinals better, I don’t remember. I’m not sure it would have made a difference.

My guess is that a contemporary CS department would be open-minded enough to appreciate something like the the ℵ0 mind. The presenter would probably be praised for involving students, and explaining new subjects like ordinals.

However this was a long long time ago and it appears faculty were too uptight to appreciate such a nonstandard approach. As I said, nobody said anything but I’m convinced the ℵ0 mind terminated my career at UFFA.

In fact I didn’t last long at UFFA and, because I committed another CLM that I won’t go in to, I basically had to go into exile in the UK.

I stayed nine happy years in the UK and managed to avoid any more CLMs.

When I returned to Canada I did fine – then, inevitably, committed two more CLMs. I don’t regret them and in fact they had the welcome effect of ending my administrative career.

There’s a lot to be said for CLMs. Success is overrated!

1 Response to The Secret of Academic Success – or fun filled failure if you prefer [14,300 views]